Here is a space to introduce the section on Supervisor Jim Desmond's key issues.

In 2004, San Diegans voted to extend a half-cent sales tax for 40 years starting in 2008.  In exchange SANDAG promised to relieve traffic congestion by making critical highway improvements to the 78, 67, 94, 125, 805 and 52, and many other major San Diego County highways. Those promises have been unfulfilled while public transit has received the majority of the dollars. In order to relieve traffic and make everyone’s commute faster, the freeway projects that have been promised to all San Diegans, must be finished!

Currently, the push from SANDAG and the State of California is to fund trains and trolleys, a transportation method that peaked in the 1800’s. Instead, we should be focusing on future technologies that will make our commute easier and safer.

Self-driving cars are closer than they’ve ever been, but to make them a reality, we must invest in technology that allows the cars to “speak” to each other. As an airline pilot for 33 years, we’ve had this technology for a long time; aircraft letting each other know where they are positioned, thus avoiding collisions. That technology exists in cars right now and is being tested through pilot programs in cities across the country. San Diego County should be at the front of the line looking at the latest means of transportation.

Also, as a Board member for the North County Transit District, one of my biggest worries is the Del Mar Bluffs and the adjacent rail line. This is the 2nd most traveled rail line in the Country and it’s a huge transporter of goods and items, along with people. We have already seen several bluff collapses over the years and it’s only a matter of time before something devastating happens. SANDAG is putting dollars towards temporarily fixing the issue, but this needs a permanent solution, the tracks need to be fixed.

Americans like freedom. Families need flexibility. We like going where we want to go, and when we want to go there. Public transportation, while useful in some areas, doesn’t work for the entirety of San Diego County, which is why only 3.5% of San Diegans use it. When it comes to spending billions of taxpayer dollars we should be investing in our future, not the past.

San Diego County and the State of California have spent hundreds of millions of dollars helping those who are experiencing homelessness.  However, we continue to see the problem expand with no visible results. In fact, it seems more widespread and worse. So, what can we do?

I believe that the majority of those who are experiencing homelessness struggle with substance abuse. As a society, we have gone from one extreme – the war on drugs, by incarcerating anyone using or selling drugs- to the other extreme of allowing people to abuse drugs on our sidewalks.

Many people are fed up with this situation, as it’s impacting their businesses, recreation areas, freeway onramps and overpasses, and the blight from the incredible amount of garbage that is produced by encampments. I don’t blame them!

A lot has been made about the “Housing First” model which promotes putting those on the street into free housing, but this allows them to continue their drug and alcohol abuse. Shelters and free housing should not be a revolving door. We must have accountability, with treatment and incentives, to get people out of the addiction cycle. San Diego County needs to be willing to enforce removing people out of encampments and into treatment.

On April 6th, 2021 I initiated action to provide 15 new staff members to support North County cities and those experiencing homelessness. This developed a pilot program for North County, which provides an outreach staff and highly qualified social workers in each city. This has provided those needing assistance with the help they need.

On September 30th, 2021 I led the effort along with the City of Vista to build a Crisis Stabilization Unit. Many living on the streets are suffering from behavioral health issues, often from addiction and this is a place where families and the police can take someone that is having a mental health issue, because the emergency room is not for them. 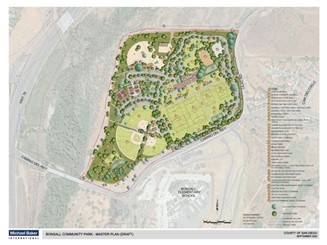 The San Luis Rey River Park is a master plan which will include two park sites and a multi-use trail that will go from I-15 to Oceanside. The two park sites are located in Fallbrook and Bonsall.

The Fallbrook Park site is 68 acres and is located off of Dulin Road next to I-15. The Park will include recreational ball fields, trails, a frisbee golf course, dog park, and picnic areas.