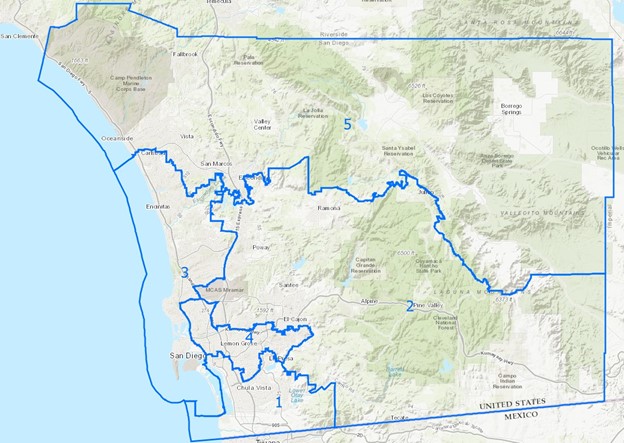 The Fifth Supervisorial District covers the northernmost area of San Diego County, and is more commonly known as North County. It stretches from the wave-swept sands of the Oceanside coast, to the pine-topped hills of the Palomar Mountain Range and beyond to the expanses of Ocotillo Wells. The district, with over 2,000 square miles, is a vast resource of nature, industry, universities, resorts, golf courses, fine restaurants, agriculture and a theme park. Supervisor Desmond and his staff consider it an honor to serve the approximately 700,000 people who reside in the Fifth District.

The Fifth District is one of the two supervisorial districts that predominantly contain unincorporated communities. It is also the biggest district in San Diego County, making up over 51% of the entire county. Fun fact, District 5 is bigger than the state of Delaware!

Agriculture is a major industry in the Fifth District and the San Diego region. Fallbrook summits and Escondido valleys are covered with groves of avocado and citrus trees. Elsewhere, cattlemen tend their herds in the oak-studded inland valley, and farmers plant and harvest their crops that include strawberries and tomatoes. In springtime, wildflowers carpet the Anza-Borrego Desert.

In addition to agriculture, several other industries make North County a hotbed for economic success. Innovation, tourism and specialized manufacturing are thriving in North County and are the future in the Fifth District. The biotechnology industry has firmly established itself in the district, providing high-paying jobs and cutting-edge opportunities to thousands of workers. North County is also becoming a regional powerhouse for higher education as the California State University San Marcos campus continues to grow along with the Palomar and MiraCosta Community College campuses. In the unincorporated area, Ocotillo Wells provides outdoor adventures for all skill levels, with visitors from all around the world.